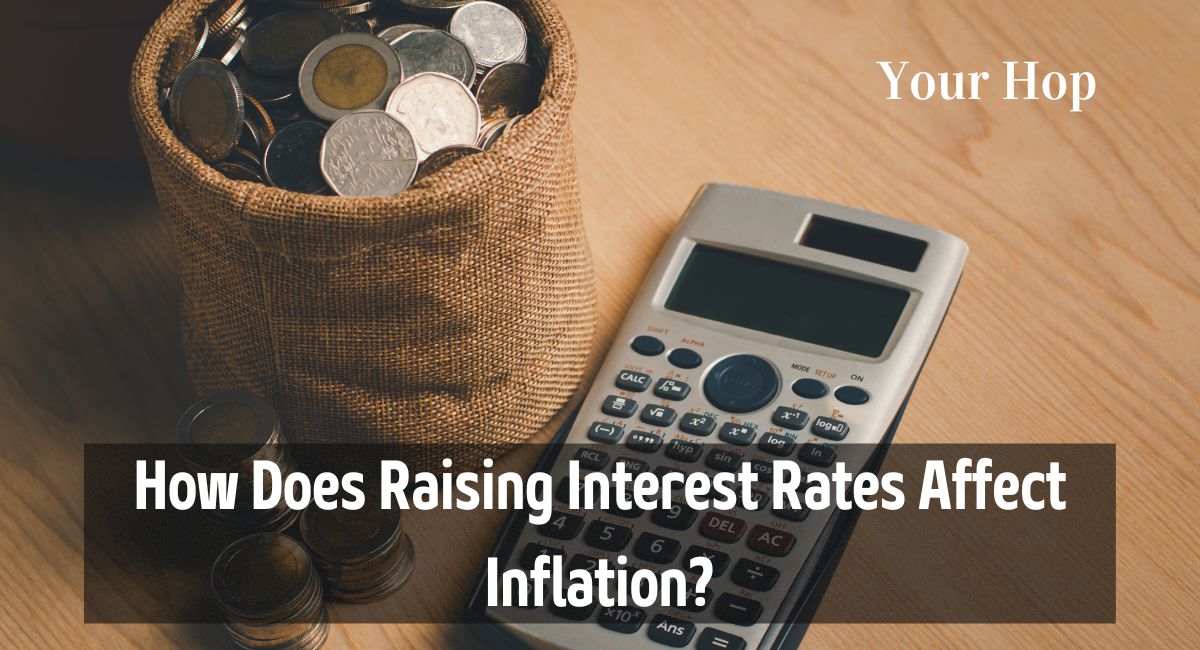 This, in response, makes the loans for the general public costly. If borrowing money or carrying debt on a credit card costs more, people will spend less. When spending decreases, demand and, eventually, the price of common commodities will fall.

Let’s learn more about the interest rates and their effect on inflation and other factors.

How Does The Fed Raising Interest Rates Affect Inflation?

The Federal Reserve is responsible for managing the nation’s money supply and monetary policy under the direction of Congress. The Fed does this in part by adjusting interest rates for borrowing money. Interest rate decreases are meant to encourage individuals and businesses to borrow and spend more.

On the other hand, interest rate increases help restrain inflation since consumers spend less when borrowing costs rise. But how exactly does it work?

The Federal Reserve is the central bank of America. It is the institution upon which commercial banks rely for some of their most vital banking requirements. As a result, all banks have deposit accounts with the Fed, often called reserve accounts.

Having a reserve account is similar to having a deposit account at a traditional bank, except that reserve requirements, exist for the majority of American institutions. Additionally, the banks have to pay interest on their loans just like any other lender. The Federal Reserve has a hand in setting this percentage, which is called the federal funds rate.

When customers want access to standard loan products, banks pass along the expense of a higher federal funds rate to those customers. In consequence, changes in the prime rate increase the cost of borrowing for all other loan products, including mortgages, auto loans, and revolving debt such as credit cards.

According to this theory, customers will spend less if it costs more to borrow money or carry a balance on a credit card. Therefore, if consumers cut back on their spending, demand will drop, and commodity prices will fall.

On the other hand, there is a potential downside. Higher borrowing costs, soaring inflation, and sluggish growth are all factors economists say could lead to a recession in the United States. It is therefore incumbent upon the Federal Reserve to proceed with caution.

But it can have downsides too. For example, it can result in sluggish growth of the economy. So the Fed has to proceed with caution relating to the interest rates.

How Do Interest Rates Affect Stocks?

Rising interest rates have a negative impact on the performance of stocks. If interest rates increase, individuals will receive a greater return on their savings. This eliminates the need for individuals to incur additional risk when investing in equities, decreasing demand for stocks.

When interest rates increase, it becomes more costly for businesses to raise funds. This is because they will be required to pay higher interest rates, for instance, on the bonds they issue. As a result, increasing the cost of raising finance could dampen future growth potential and short-term earnings.

What Happens to Markets When Interest Rates Rise?

When interest rates increase, the expense of borrowing money increases. This increases the cost of acquiring goods and services for consumers and businesses.

Purchasing a home, for instance, gets more expensive as mortgage rates rise, and financing the expansion of a firm similarly becomes more expensive as loan rates climb. When this occurs, people spend less, resulting in an economic slowdown.

Does Interest Rates Have An Effect On Recession Too?

In 2002, the Fed reduced the federal funds rate to 1.25 percent, providing a prime illustration. This significantly contributed to the 2003 economic rebound.

By increasing and decreasing the federal funds rate, the Fed can prevent inflation from spiraling out of control and mitigate the severity of recessions.

This was all about how does raising interest rates affect inflation. Actually, if you see it from the supply chain perspective, interest rate increases also help to lessen the pressure on the supply chain. This is because consumers with a lot of disposable income have the potential to pressure supply systems, which in turn could lead to price increases.

The Federal Reserve’s standard response is to increase interest rates, making borrowing money more expensive. Because of this, consumers have less disposable income, which puts less pressure on the supply chain, decreasing demand and ultimately helping to rein in inflation.

Hope this article was helpful & informative to you. Please leave your valuable thoughts & suggestions in the comments below!

How Much Money Do You Need for Private Wealth Management?

Becoming a Real Estate Marketing Expert in Your Area

Steps to Ensure You Are Making a Profit in Business