What is a good typing speed? 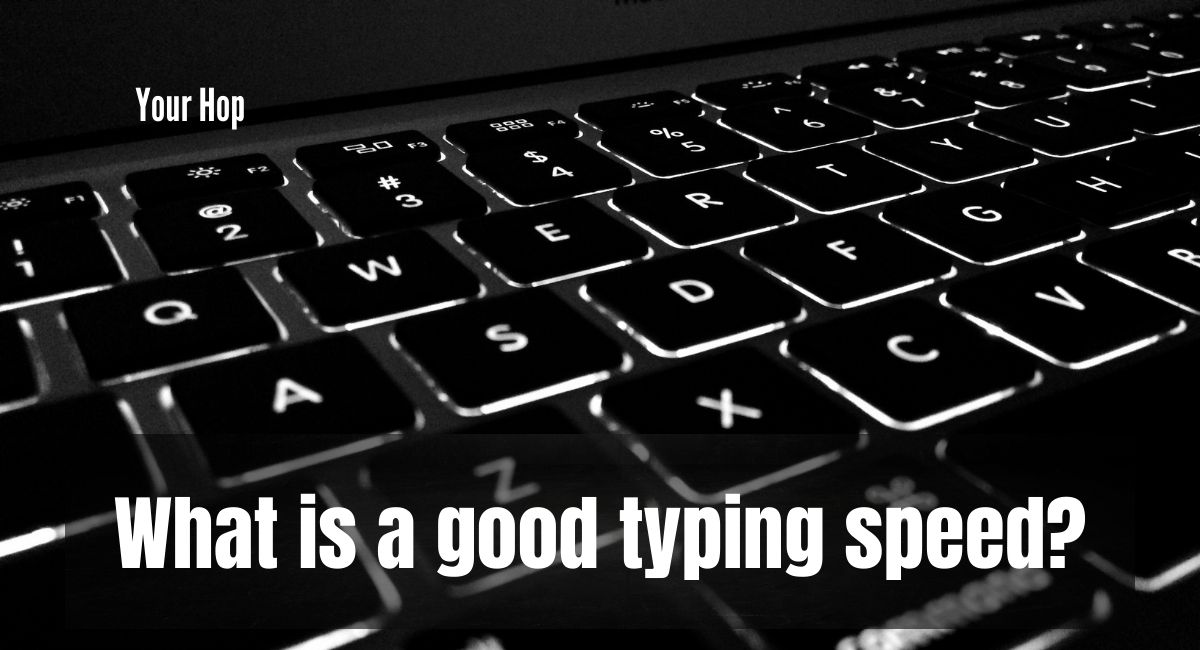 In today’s time, there is one thing common between a student, an employee, and a businessman, which is the use of computers. All of them use computers for their own kind of work, and one thing necessary for their work is the good typing speed. Whether you are writing an assignment or making a report for a meeting, you need to have a good typing speed to finish work as fast as possible. But what is a good typing speed? How much will fast typing speed be considered average or standard?

On average, the 41 WPM speed with 92% accuracy is considered a good typing speed. However, the 55 WPM speed is considered very good, and anyone who can do 65 to 70 WPM then they are on an expert level.

What Is a Good Typing Speed Per Minute?

If you are 17 years and older, then a typing speed of 45 WPM with 90% accuracy will be considered a beginner.

If you have a typing speed of more than 55 WPM with 95% accuracy, then you will be considered intermediate.

If you have a typing speed of more than 65 WPM with 100% accuracy, you will be considered an expert in typing.

What is a good typing speed for jobs?

To get a job, you should have at least 40-45 WPM per minute typing speed for men, and for women, the typing speed needs to be between 37-40 WPM.

This much typing speed will get you jobs related to accounts, secretary, and even content writing because these kinds of jobs require just intermediate typing speed.

However, if you have a typing speed of more than 50 WPM a minute, then you can have a job that involves a lot of typing work, like a job as a typist, an expert content writer, and a data entry job.

What is a good typing speed for a beginner?

If a person older than 17 years of age has more than 50 WPM typing speed, he will be considered Intermediate in typing level.

A person with more than 60 WPM typing speed will be called an expert in typing.

What is a fast typing speed?

The fastest typists in recorded history reached rates of more than 200 words per minute. Stella Pajunas of Chicago achieved 216 words per minute on an IBM electric typewriter in 1946. Her record is unbroken to this day.

Barbara Blackburn of Salem Oregon came close in 2005 with a speed of 212 words per minute. However, others might say that they are comparing apples to oranges because she uses a customized keyboard.

How to improve typing speed and accuracy?

If you have a slow typing speed or want to improve your typing speed, you need to follow some tips that we have mentioned below. So be sure to follow all these tips.

1) Type with the right typing method

One of the biggest causes of a sluggish typing speed is the improper typing approach. Generally, people employ the Hunt & Peck typing approach to type. In this method, typing types by first looking at the Keyboard and then pressing the key. Unfortunately, this method is very time-consuming.

On the other hand, the touch-typing method should be used for faster typing speed. In this method, the typist has memorized the keyboard layout in mind and just types while reading the text he is typing.

So, to improve speed, you need to memorize the keyboard key placement with your fingers being adjusted to them.

2) Use All Ten Fingers

Most of us make this mistake by typing with two fingers on each hand. This converts into a habit and becomes difficult to change. Ideally, all ten fingers should be used, which increase the typing speed and also the accuracy,

You need to practice for a long time to adjust your fingers on the keys and gain a fast typing speed.

Typing speed and accuracy can be improved by using various free online and offline programs. Use them without hesitation. The good news is that this is a positive thing in order to prepare for the real thing. You can find several free typing exams online.

You should look for those that offer practice or a mock one-minute typing exam with a range of texts and provide thorough information regarding your typing speed, including the number of keystrokes, misspelled words, and keystroke errors that you made.

4) Master the Keyboard and keep practicing

When it comes to enhancing your typing abilities, becoming habituated to the activity is crucial. Muscle memory is the key to success in this endeavor. As if you were playing a computer or console game, think of it as a simulation. If you don’t know how to use the control keys and don’t spend time playing, you won’t succeed.

Before taking a typing exam, learn how to use the Keyboard properly and when you are confident that you have memorized the key placement, then start the typing tests.

How fast do professional typists type?

Professional typists can type anywhere between 60 WPM to even 80 WPM. They achieve this much faster speed through consistent practice and the right typing technique. However, the typing speed perimeter is different for different professions.

Secretaries, for instance, must be able to test at a rate of around 50-80 WPM or 250-400 CPM, with a high degree of accuracy. On the other hand, for occupations that need more precision and speed, such as dispatching or creating captions for news, the typing speed should be approximately 80-95 WPM or 400-475 CPM.

Now you know what is a good typing speed. Try to take a typing test and then compare it with the good typing speed that we have mentioned. If you can outpace that speed, you can be an expert in typing. However, if you will be slower than average typing speed, then you are just a beginner and need more practice.

We hope this article was helpful and informative. Please leave your valuable thoughts & suggestions in the comments.

What gift cards does Walgreens sell in store?

Why All Companies in the UAE Have to Be Audited?

How much does the Vice President make?