What is [FROST HEAVE] | Frost Boil Definition, Prevention and Solutions

there is a fact between water and ice – when water change to ice its volume increase. this fact responsible for the heave.

when water freeze in soil its volume increase and try to expand the soil which gives an undulation heave to the ground surface this phenomenon called frost heave. heave has also the power to lift the small structure. which not good for any structure safety. 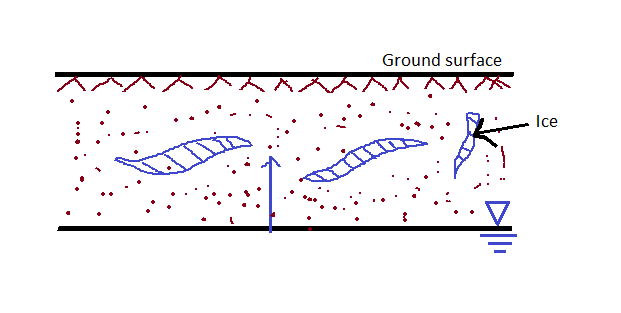 another factor called permeability is responsible for the frost heave action. some fine grain soil like Silt, fine sand has high permeability and also capillary. which give high heave.

Fine grain soil like Clay has high capillary but low permeability and a very negligible heave, the reason for that.

when water starts freezing it needs a high permeable path to make ice crystal by connecting all flow line in the soil, but clay soil prevents permeability, so a big ice crystal not formed as compare to Silt and fine sand. which give less or no heave.

we know Frost heave above now frost boil is just reverse the cycle of frost heave when the temperature increases the soil which contains ice lenses start thawing of ice.
this gives thawing start from the above layer to lower layer, now the above layer ice thaws quickly and lowers layer take time which gives restriction to the permeability of water which presents in the above layer.
that restriction gives an increase in water content in the above layer. and above layer become a very soft layer like liquid.
the process which is responsible for the softening of this layer called Frost boil.
Now again silty soil is most affected by frost boil, I think it does not need to explain why because you relate this easily after reading frost heave article.

How to Prevention or repair Frost heave and frost boil

Frost boil and heave create great difficulty in highway or Runway because of low depth. the following are some solution to prevent these action.
1. very important to provide good drainage system to the area which has a high chance of affection by frost action, it drains thaw water quickly.
2. By providing a layer of a gravel blanket is also a good solution because gravel has low capillary action.
3. Mixing sodium polyphosphate in soil decrease permeability of soil which prevents interconnecting of the ice crystal.
4. Also, the best solutions are replacing the soil like the silty and fine sand by coarse sand and gravel, which give the best solution but when large area involved its not economical.